Back in 2015, I have first discovered Derek’s sound. I was completely mesmerized by the groovy strong vibes of the Bug Club track, so I ultimately started listening to more of his music. The new kid on the block; the new rising star of the Romanian minimal sphere, but one that seems to truly have a powerful and complex composition structure, from smooth acoustics to a forceful bass, and intense kicks that make your heart race.

Fast-forward a year later, I invited Derek to be part of a local party I was organizing with a group of friends. It was some sort of bad luck for the rain to storm out the event in the middle of the summer, and we had to cancel. Even though I hadn’t had the chance to see him live or even meet him that day, I kept on watching his evolution from a distance. It was only last year when I first managed to finally make it: Derek played the warm-up set for Richie Hawtin at Electric Castle. I have always had this weird sort of habit to watch a DJ’s body language during a set; he is one of the most focused artists when playing. To me, it was clear that he truly cares about one moment: the genesis of each transition. The crowd had enjoyed the set, as I could tell, including myself; I can’t even recall stopping at any point. It was some sort of a relief feeling to see a Romanian artist play something different, which reminded me why he caught my attention in the first place. 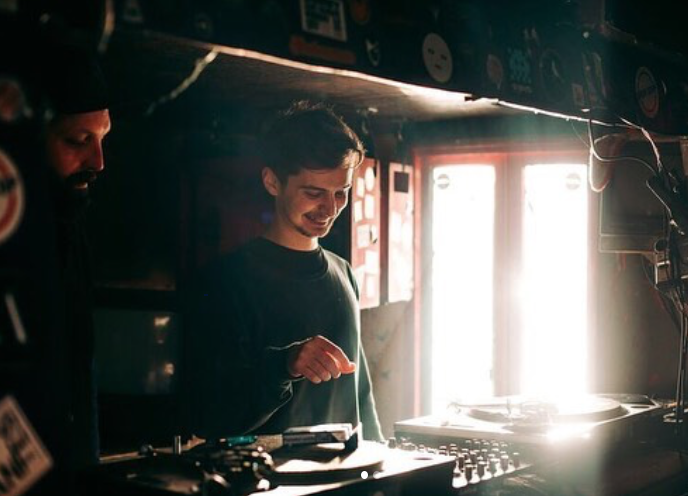 THE GLITCH MADE OUT OF SOUNDS

He caught my attention as his musical story seems to possess some sort of strong emotionalism, combined with a small dose of Kraftwerk’s legacy, euphoria, unearthly mystery. He’s mastered every aspect of his production journey, and he is currently looking forward to improving his skills by creating new projects that will emphasize his originality.

As for the rest, as I have recently expressed my obsession with one of his unreleased tracks, I recall he said: “Yeah, thanks, but I still need to improve this and that”. Unlike his powerful tracks, you might say he is quite the shy one when you first get to meet him. It wasn’t surprising for me to discover that he is really modest and quite critical about his work, and I personally think it is a strong advantage for an emerging artist like himself.

He is currently a resident of the Sunrise family, but the future? He moves towards a combination of music and visuals: the launch of his own label VHS Records. An unbearable grandeur, a clean clash between the art of glitch and intense tracks, gathering together some remarkable glitch artists, add some Ambiental or rough sounds, and truly impose a new imprint on the Romanian electronic music scene. I am truly convinced his vision will aim to cross the local boundaries, and he has previously proved himself to be one of the most appreciated young artists abroad, giving his sound has traveled from Bucharest’s local clubs to Club Der Visionaere (Berlin), Circoloco (Ibiza) or Ibiza Underground.

As the cold night is taking over Bucharest tonight, I am inviting you to find a comfortable warm spot, pour yourself a glass of wine and enjoy the next groovy vibes and get to know this awesome guy through his music.